Flowers for a woman or a man for an anniversary should be chic and wholeheartedly. But this does not mean at all that you need to spend a large amount of money. Our professional florists know how to make such bouquets that will surely cause joy and delight in the hero of the day.

What flowers are customary to give for the anniversary?

Any flowers in the hands of talented florists can turn into a luxurious gift that will be pleasant to present in a festive atmosphere. Basically, there are two restrictions when choosing flowers for an anniversary: ​​

Traditionally, an anniversary is a celebration in honor of the 50th anniversary. But today it is customary to celebrate 60 years and other birthdays on a grand scale, if the age ends in "5" or "0". When choosing a bouquet, first of all, you need to focus on the tastes of the hero of the day, but you can also follow the tradition. In this case, they usually give lilies, roses, chrysanthemums, tulips, calla lilies. To the question “how many flowers are customary to give”, there is only one answer - the more the better. The color of the composition can be selected based on your wishes for the hero of the occasion: 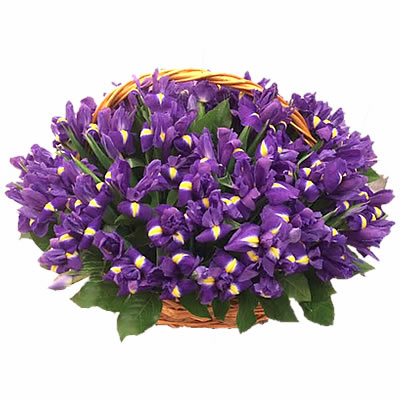 What bouquet to choose for a woman's anniversary?

There is a universal version of a female anniversary bouquet - these are red roses. No less often white or pink calla lilies and lilies are presented. Despite the fact that the bouquet is not the main gift, it is worth choosing an unusual flower arrangement that will impress and be remembered for a long time. After all, we do not celebrate such holidays so often.

To please the birthday girl, try to match flowers based on her temperament. So, energetic women most often like bright, and phlegmatic women - calm shades of buds. Pay attention to the lush bouquets of peonies, spray roses, irises, gerberas, orchids. Anniversary flowers do not have to be collected in a traditional bunch, on this day a woman can be presented with a whole basket of her favorite flowers. & Nbsp;

Bouquet of 51 irises in a basket " Why a lot ". Irises have a very interesting aroma. Many women are fans of this purple mysterious flower. If you know for sure that the birthday girl likes irises. Why not please her with their abundance?

Red roses and white lilies are a template gift option. Mom needs something special. A bouquet of light pink, cream shades will do. He can express tenderness, love, special attitude. Pay attention to the ensembles of pink and white roses, peonies, huge armfuls of daisies, compositions of seasonal flowers - lilacs, sunflowers, chrysanthemums.

Bouquet of 101 roses " Django ". Can you imagine your mother with such a huge armful of cream roses at your anniversary, surrounded by relatives, friends of colleagues? She will be pleased. This bouquet can evoke a lot of emotions - embarrassment, admiration, and pride. An anniversary is the right occasion for such a gift!

Flowers for an anniversary for a friend or work colleague

The best option is white flowers. They express friendship and appreciation. You can pay attention to the orange ones, especially if the birthday girl is already 50 years old. This color symbolizes admiration, reverence and respect. In addition to roses and lilies, gladioli, chrysanthemums, tulips are perfect.

What bouquet to choose for a man's anniversary

Men are not as sensitive to flora as women. Flowers for the anniversary in this case are more of a formality than a necessity. And, naturally, they are not given as often as women. Corporate ethics in this sense equates employees: for the anniversary, everyone is presented with flowers in addition to the usual gift. In the home circle, flowers are not given to men so often. But still, a loving dad will be pleased if his daughter brings him flowers on this solemn day and presents them personally with warm words. And let all the guests at the same time see how she loves him. Dad will be proud. The same goes for caring grandfathers and uncles. At heart, all men are sentimental. & Nbsp;

We often find ourselves in a quandary when choosing flowers for a man. In European culture, there is no difference between masculine and feminine bouquet. But in Russia, choosing him incorrectly, the hero of the occasion can be put in an awkward position. It is difficult to imagine a hero of the day with a bouquet of daisies. Usually, men are given roses, carnations, gerberas, hyacinths, tulips. 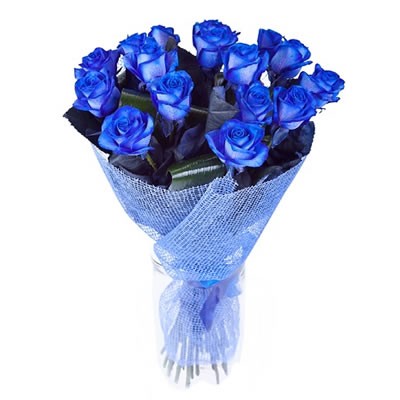 Bouquet of 15 blue roses " Lightning " - an interesting version of a man's bouquet, roses are suitable for a festive atmosphere, blue symbolizes masculinity and sincerity. The composition is laconic - nothing superfluous. At the same time, blue roses look unusual - this is a bouquet for a special occasion.

Anniversary is a symbolic boundary between old and new life. Marking round dates, we tend to sum up, analyze what we have achieved. If the anniversary is celebrated on a grand scale, then a person has something to be proud of - family, position in society, respect of colleagues. Therefore, the bouquet on this day should be special, emphasize respect for the hero of the occasion, its importance for you. Treat the choice of flowers with awe, because it is so important for the birthday boy. In our online store you can pick up and buy a bouquet really worthy of such an occasion. Visit our website, call, choose! We will be happy to help you!

Your shopping cart is empty!